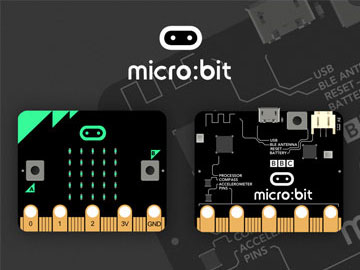 What is a Micro:bit? It is a pocket-sized computer 70 times smaller and 18 times faster than the original BBC Micro computers used in schools. It has 25 red LED lights that can flash messages and be used to create games. There are two programmable buttons that can be used to control games or pause and skip songs on a playlist. It has an accelerometer so it can detect motion and knows when you’re on the move. The built-in compass knows which direction you’re heading in and it can use a low energy Bluetooth connection to interact with other devices and the Internet.

We have Micro:bits available from all 34 of our libraries in Somerset, as well as in the Glass Box in Taunton library, which means anyone can use their library card and borrow a Micro:bit for three weeks for free! In the kit you will find a Micro:bit, micro USB to USB cable (to connect to your digital device), battery pack and an instruction booklet, to get you started.

So why not pop into the Glass Box, borrow a Micro:bit and use the computers to create your first bit of code. The Micro:bit has many features you can use in your coding, from the 25 LEDs, temperature sensor, compass sensor, buttons and even Bluetooth. With the battery pack once you have programmed a Micro:bit you can make it portable.

To program the Micro:bit you can visit;

About the Micro:bit Educational Foundation

The Micro:bit Educational Foundation is a not-profit organisation. Their vision is to inspire every child to create their best digital future.
The Foundation was legally established with the support of our founding partners in September 2016. We became fully operational on 18th October 2016 and mark this as our birthday (with plenty of cake). Micro:bit Educational Foundation is a UK based organisation and redistributes the bulk of any surplus money generated into providing free devices to exceptional micro:bit educational programmes across the globe.

You can use Code Kingdom JavaScript, Microsoft Block Editor, Microsoft Touch Develop or Python to code the Micro:bit. By using a block coding editor anyone can code, just drag and drop the code bars to connect them and see what you can create. Then change the blocks or the order to see what will happen next.

And there are plenty of projects available by Googling Micro:bit projects.